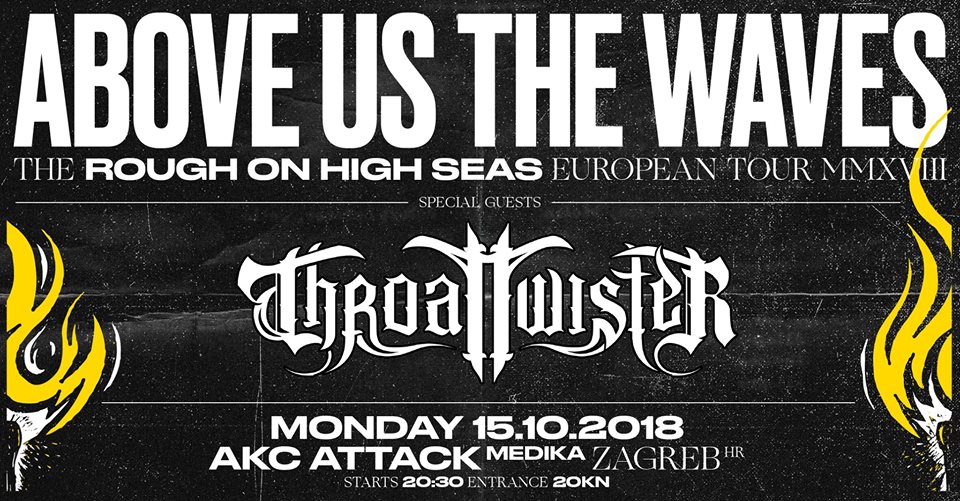 ABOVE US THE WAVES:

A.U.T.W. is a five-piece band from Greece. Their sound contains elements of melodic death metal and post hardcore focused on heavy riffing and strong melodies.

A.U.T.W. released their debut album “Anchors Aweigh” via the Athens, GR based label Spreading Dysphoria Industries. The album gained great reviews and was featured on RockHard, Metal Hammer and was also chosen as one of the top Greek metal release of 2013 by Sonik magazine.

Their energetic live performances have gained them a growing following and many headline shows and tours around Greece and South East Europe. They have also appeared as support act for bands like Unearth, Comeback Kid, Caliban, Defeater, Rotting Christ etc. and have appeared on festivals like Rock-Off (Istanbul, 2014) w/ Megadeth, HIM, Gojira, Amon Amarth etc.

Their latest endeavor “Rough on high seas”, mixed and mastered by Jay Maas (Defeater, Bane, Vanna, Capsize and more), marks a step ahead for the sound of the band, focused on a more organic sound, intense lyrics and songwriting, keeping though their melodic approach intact. ROHS was recently released worldwide on June 8th 2018 via Growl Records.

ThroaTTwisteR is a Metal\HardCore band from Zagreb, Croatia. We’ve been around since 2007, played over 150 shows and released 2 studio albums, 2 singles, 2 music videos and our latest EP „X Years Of Misery“. We’ve shared the stage with bands like JINJER, BELPHEGOR, THE CROWN, SHAI HULUD… TT is well known for our aggressive, highly energetic shows that perfectly complement our music style. Band consists of 5 members: Nikola on drums, Domagoj on guitar, Domagoj on bass, Goran on vocals and Bruno on second guitar. We have always been honest about our music style and preference: keep it loud, keep it agressive, keep it true. See you in the pit!