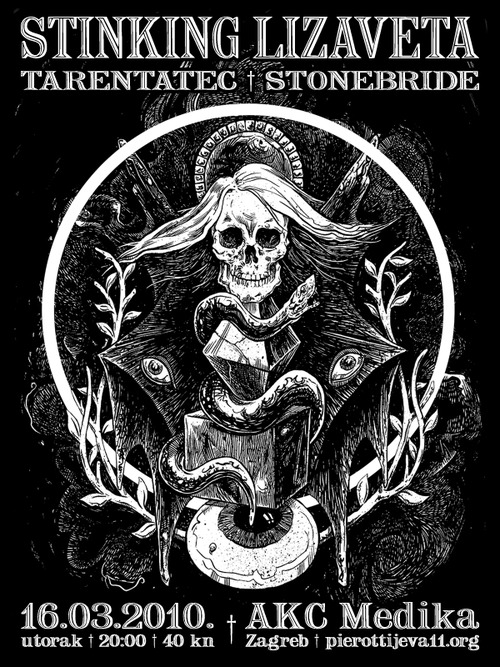 One of America’s most durable and powerful rock bands is back with its sixth album. Stinking Lizaveta’s “Sacrifice and Bliss” is the latest from the instrumental trio specializing in what one reviewer calls “insane improvisations, relentless rhythms and volumes of groove.” If you’re tired of the stale sludge that passes for modern metal, the sparkling crunch of Stinking Liz’s latest will restore your faith in rock and roll.

“How do we tell stories with out words?” asks Stinking Liz drummer Cheshire Agusta. “Compelling melody. Hypnotizing rhythm. Passion and detail.” This is the mission underlying “Sacrifice and Bliss,” which features ten original tunes, including ” A Day Without a Murder”, which first employs a floating 10 to disorient, then proceeds to thrash rock from a stone, and “The Man Needs Your Pain”, a wide swinging ballad that leaves plenty of space for all three players to weigh in.

Just as all great jazz ensembles carry the time without any one musician stating it, Stinking Liz carries the narrative between them. And as everyone knows, the deepest and ultimately most satisfying story is the unvarnished truth – joy, struggle, head banging bliss. There is work and there is love: “Sacrifice and Bliss.” That’s how Stinking Liz tells it.

The LA Times has hailed the veteran rockers as “both polished and unruly,” and “Sacrifice and Bliss” excels on both counts with crisp production, massive beats, and dazzling fretwork. Like crazed Russian composer Alexander Scriabin artfully deconstructing and reconstructing melody, guitarist Yanni Papadopoulos’ squealing, singing lines soar above brother Alexi’s churning electric upright bass. Drummer Agusta holds it all together with a pounding that’s one part Elvin Jones and another part John Bonham. Mixed with the masterful production of Sanford Parker (Pelican, Rwake, Nachtmystium), “Sacrifice and Bliss” shows a heavy rock trio at its absolute best.