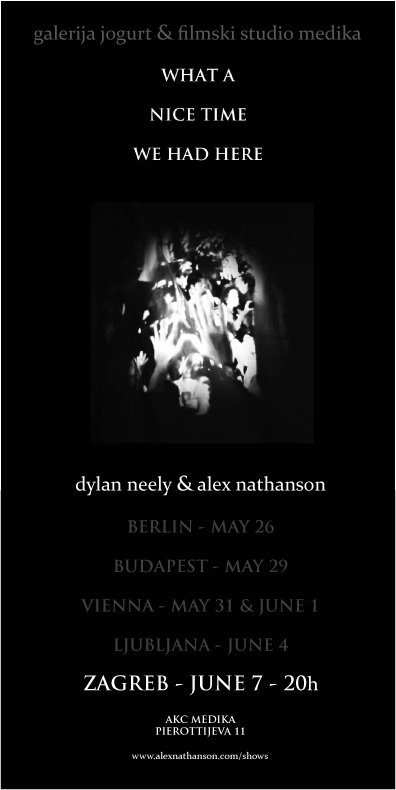 “The only thing I am afraid of is that we will someday just go home and then we will meet once a year, drinking beer, and nostalgically remembering what a nice time we had here.
Promise ourselves that this will not be the case.” (Slavoj Žižek, NYC 2011)

What a Nice Time We Had Here is a collaboration between a video artist Alex Nathanson and a violinist and composer Dylan Neely. The projections are based in computer programs Nathanson writes in Max/MSP/Jitter to take sensor data from the live performance to control video play and animation.  Neely’s improvisational style is influenced by Eastern European Roma folk music, punk, and minimalism. The project explores nostalgia, dreams, and the desire for meaningful social and political action, taking Žižek’s above quote as a starting point for exploring footage captured on the morning of October 15th, at Occupy Wall St. in New York City.

Alex Nathanson is a video artist, photographer, and curator based in New York. He is a member of the curatorial collective Pulp Legend and, along with Dylan Neely, founded The Bat Barn, a performance space in Great Barrington, Massachusetts. His work has been shown at PS122 Gallery, 25CPW, the School of the International Center of Photography, and numerous publications. His live video projects have been presented in collaboration with the bands Man Forever, Vernous, and John Snyder at numerous art spaces in New York City, Brooklyn, and the greater north eastern region of the US. A full CV can be viewed here,
alexnathanson.com/about.html

Dylan Neely is a composer/violinist based in New York City. He is currently a participant composer in the New York Youth Symphony’s Making Score program, with an upcoming performance at Symphony Space and reading by the American Composers’ Orchestra. Past honors include a Fulbright Fellowship to Belgrade, Serbia, and multiple scholarships and awards from Bard College at Simon’s Rock, where he graduated with his B.A. magna cum laude at the age of nineteen. Additional studies at the Belgrade Faculty of Music and Juilliard. He attended the 2011 highSCORE festival in Pavia, Italy, where his string quartet Balkan was premiered by Quartetto Indaco. His teachers have includedTatjana Milošević Mijanović, Larry Wallach, and Conrad Cummings.